In 1908, two boys arrived at the home of Rev. Samuel B. Chase in Lewiston.  The boys had been found at a farm near Moscow, Idaho, by Dr. O.P. Christian, superintendent of the Boise-based Children’s Home Finding and Aid Society of Idaho.

From 1908 – 1912 Rev. Chase and his wife took in over one hundred orphaned youth and began seeking foster parents for them. 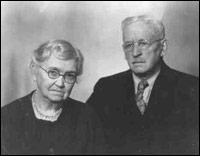 Rev. Chase and his wife

Foster parents were required “to treat the child kindly and properly, to provide a public school education for at least six months of the year, to teach the child to work and to guard his morals, health and habits until such child should reach 18 years of age.”

A few excerpts from an article featured in the Nez Perce County Historical Society, The Journal, called North Idaho Children’s Home . . . an Island in the Storm:

“A young girl in 1932 on her way to North Idaho Children’s Home expected the worst.  Instead, at a time when the nation’s depressed economy thrust the girl’s troubled home life into turmoil, she found a sanctuary wherein she could grow to adulthood.  As a result of her nine years’ stay at the Home, she learned to ‘have confidence in myself, to have poise and continue my education’.  North Idaho Children’s Home has provided that special help since its founding in 1908.  Its long history unfolds into a series of heart-warming and heart-rending stories, for the experience of each child in the Home was a different story.”

“Some of those children were orphans.  Most, however, were children whose parents were either unable or unwilling to care for them.  From the Home’s founding, the objective was to place needy children in the home of good families.  The placement might be temporary – the length of time required for the natural parents to get back on their feet financially – or the placement was permanent.  After the child was legally released by the natural parents to the Home’s custody, that child would be eligible for adoption.  Whatever the situation, the child could not be placed with a family immediately.  A temporary shelter was necessary.  To the Home Finding Society, that place became known as the Receiving Home.  To the public it became known as ‘the orphanage’.  To most children it was home.  It was certainly never intended to be an orphanage, nor was its purpose to replace the child’s natural or foster home.  Instead, it was a place to temporarily house the children until foster homes could be found and a place to which children in the society’s custody could return if necessary . . .  To the home came confused, neglected, frequently abused children in need of care . . .  Some children were ‘problem children’ who could not be placed in foster care until they were ‘properly adjusted with the right attitude toward life’. . .  As early as 1930 a superintendent recognized that a child’s home life could seriously impair a child’s emotional development to such a degree that some type of special help was necessary.”

The Children’s Home governing board voted to buy the Hurlbut Mansion.  The state pledged $7,000 toward the purchase and the remaining $7,000 was raised in pledges from individuals, organizations, and most of Idaho’s 10 northern counties.  Matilda Gray, affectionately known as Mother Gray, became the home matron and, during her 19 years on the job, cared for 1,500 youth.  During her tenure, life at the home was very stable compared to the outside world, which went through the Great Depression and World War II.

According to Marion Swedland, Superintendent from 1943-1951:

“The war era also witnessed changes in the work of the Society.  While history is being made and maps of the world are being changed almost daily, our society is going through a period of transition.  Before the Idaho Child Welfare Program was established in 1938, the society was called upon to assist county officials in making investigation of nearly all child related cases.  Now child welfare workers are in practically all counties.  Our work is confined to caring for children sent by the courts after records have been investigated.  We are also called upon to extend temporary aid, and if the family is not rehabilitated, we are sent on a permanent basis, children who need mental development, physical correction, social adjustment and help with behavior problems. [sic] The public image of the type of child placed in the Home must have been changed accordingly.  ‘Mr. General Public,’ Swedland continued, ‘often considers children in the home to be juvenile delinquents.  We dispute this.  Most of our children come from homes of delinquent parents.”

“Without the kind of help from people of Lewiston, Asotin County and north [sic] Idaho, the North Idaho Children’s Home might not have survived those turbulent years of the Depression and World War II.  Without the leadership, inspiration and hard work of people like Daisy Babb, Kathryn Wolfe, Marion Swedland, and especially Mother Gray, the Children’s Home would not have provided the stability and direction to the lives of the hundreds of children who crossed its threshold during those years.”

In 1966, local paper mill executive Fritz Jewett and his wife Lucy donated their 22-acre property, home and outbuildings to Northwest Children’s Home (which was then North Idaho Children’s Home), and our location changed to its current site at 419 22nd Avenue, Lewiston, Idaho.

At this point, the role of the agency began to evolve as well with a move from supporting “orphans” to rehabilitation.  This occurred during the group home era of the 60s, 70s and 80s, ultimately resulting in its current mission of short-term residential treatment (3 – 15 months).  Our beautiful park-like campus provides four programs or homes, an administration building, swimming pool, craft shop, recreation building and areas for outdoor sports.  Additionally, there are on- and off-site accredited education centers for residential and community youth.  We recently opened a transitional program in Clarkston, Washington that serves youth 16-21 helping them prepare for adulthood.